Reinventing the website of a market leader The key driver of Buster’s website renewal was to better direct users to the sales funnel and more effectively manage sales leads. Buster’s online presence was also in need of a visual refresh. Together with our client, we determined it was best to create a completely new website with a marketing automation system integrated underneath. Read the entire Customer Case from here.

The ROI of Great Design (Part 1)

In the first part of this blog series, we scratch the surface of the overall business value of design. Why should we measure the return on an investment in design? Designing great products and services for end-users - how hard can it be? It’s commonly stated that everyone’s now doing user-centered design. That’s cool, we’re also doing it - and there’s a lot of work to be done in this area. As our UX Lead likes to point out, products and services have always been designed for

Celebration or Cage Match? What Eurovision Teaches us about the Audience for Global Content

At first glance, it looks like an odd creative choice. Will Ferrell plans to make a movie about the Eurovision Song Contest. Ferrell’s Swedish wife introduced him to the event in 1999, and he quickly became a fan. Few Americans share his passion. In 2018, the Eurovision coverage on LogoTV attracted 74,000 viewers, a mere two tenths of one percent of the US viewing public. In an attempt to explain the concept to an American audience, New York based journalist Arwa Mahdawi desc

Captivate and Capture Your Online Leads - Why Interactive Content Is the New King!

It’s been more than two decades since, Bill Gates coined the phrase “Content is king!” and the mantra is still very relevant today - after all, content is what drives the world of online. Creating valuable content is instrumental for acquiring and retaining customers. Moreover, consumers today are quite happy to consume brand content, with 90% saying they like the idea of businesses using custom content to engage with them online. But it’s no longer enough to just offer inter 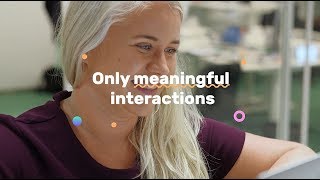 Only Meaningful Interactions by giosg

Captivate and Capture Your Online Leads - Why Interactive Content Is the New King!

A simple chatbot solution - Why you should use button bots!

How to Increase Employee Engagement with Gamification

Learn 8 Rules of Tailoring Your Presentations

Why Budget for a Sales Enablement Tool in 2021?

Have you heard these six B2B myths? Here’s the truth behind them

To automate or not to automate – This is NOT THE question

What is marketing automation?

When to think about outsourcing your marketing

A Brief Guide To Gamification In Marketing

Is Your Newsletter Accessible? Should It Be?

The data disconnect – connected data is your key to CX excellence

What are the Benefits of Marketing Automation? (Survey Results 2.0)